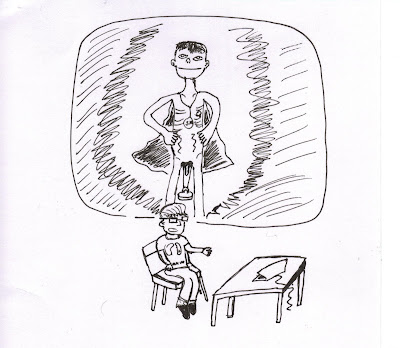 It's something of an extreme rarity for me to blog about something I have done rather than something someone else has done but on the 20th of June I had the extreme pleasure and the honour of speaking at the monthly event Laydeez Do Comics in London. Laydeez Do Comics was founded by comic artist and curator Nicola Streetham and artist, writer, curator, and academic Sarah Lightman. What started out as more of a reading and discussion group which set out to prove that ladies not only read but DO comics, has now blossomed into something of an institution. Dropping the book group aspect to focus more on bringing the best in speakers from the comics and illustration world, both established (Trina Robbins, Melinda Gebbe, Posy Simmonds) and non-established, male and female, LDC boasts a fantastically friendly and thriving atmosphere, which is inspiring and warm. It's a great place to meet people for whom the medium of comics is a passion, and to discover new things along the way.

I was hugely nervous about speaking myself, but having witnessed the general atmosphere of these events a number of times before, I was more nervous about the act of speaking in front of an audience than the response I would get (although I was perhaps a little self-conscious of looking like the dud in the room went put up against a soon to be published artist, a published and highly regarded academic, and a comics artist from Lebanon). Thankfully, the obligatory round-the-room introductions with the added question 'name something that has scared you recently' was a nice ice-breaker and it was reassuring to see some of my fellow speakers also admit to nerves. 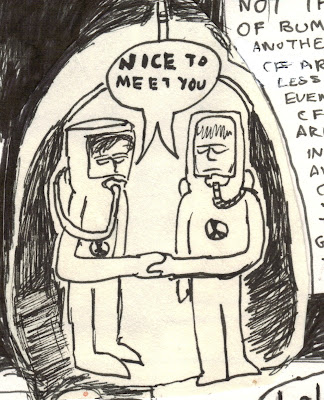 I was speaking about my autobiographical comic in progress about my life with the terminal illness Cystic Fibrosis. The one thing that's always drawn me to autobiographical comics is their non-idealised humanity, and this was something that I really hoped to try and achieve with my own work. I wanted to talk about all the things that I had done, or thought, concerning my CF that didn't exactly make me the model CF sufferer (which is why I called this first issue of the comic The Selfish Gene). I wanted to offer an alternative to what I like to call (in a typical nod to my Cultural Studies background) 'the poster-child syndrome', the image of the angelic smiling child with a terminal illness which to me is completely devoid of personality and places the person with a terminal illness way too easily into the role of passive victim. My biggest inspiration since the age of 17 is a guy called Bob Flanagan (I showed a clip from the documentary film Sick, which is about Bob, during my presentation). Bob Flanagan was an American performance artist, poet, and writer who at the time of his death at the age of 43 was the longest living survivor of CF. He was also a masochist, a submissive, and a prominent member of the S+M scene who combatted the pain of his illness, with more pain, but ultimately pain he was in control of. He was also an incredibly intelligent, warm, and funny figure whose gallows humour*(1) (along with the discovery of the hilarious and inappropriate gag cartoons of John Callahan) helped me determine the way I wanted to write and draw about my own experiences. After all, if you can't laugh about terminal illness what can you laugh at? I finished off my presentation by talking about another comic that I am working on, the semi-autobiographical 'Confessions of a self-hating male' which was inspired by my best friend calling me a self-hating male after spotting that I was reading a book called Women without men. This collection of strips is a chance for me to have fun by exaggerating aspects of my personality as a 'cowardly feminist', a straight white male who often gets mistaken for being gay because he doesn't like football or making noises like a baboon when he's drunk. A man ashamed, fearful, and disgusted by traditional masculinity, but also finds it difficult to stand up to it, and who is also very much afraid of women. A man who doesn't really identify himself as a man. These comics are going to explore this mainly through trivial events such as getting the train home from London after a big football match, somehow always being the target for blokes who like to shout stuff out of cars at strangers, and that grey area I like to call sex. I've got lots of ideas for this comic, as stuff that happens in my day to day existence tends to inspire it.

The response was far better than I could have possibly imagined, it was slightly surreal and astounding but a massive confidence boost as well. I'd been a little worried that my style was slightly too rough around the edges, but judging by the response, I needn't have.
There were many routes suggested to me but I think perhaps the first one I aim to explore is to tweak to perfection the pages I've got so far (I think there's about 28) because they are a perfect lenght to enter into the Myriad editions First Fictions Graphic Novel competition. In the meantime I'm going to work on developing it into graphic novel lenght, which is a very exciting prospect. 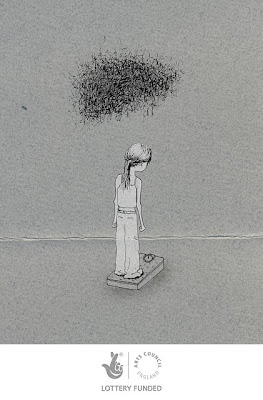 Next up was Katie Green who is also from Bristol and who is currently working on her graphic novel about recovering from anorexia and sexual abuse entitled Lighter Than My Shadow due out sometime in 2013. I admire Katie's bravery to be so open about these very painful experiences in her life, not just on paper, but in front of a room full of people. Katie's talk was very enlightening, and she peppered it with humour to put everyone at ease (talking about the surreal nature of these experiences being talked about in an editorial fashion, her editor at one point saying 'there are too many suicidal moments'). Katie said some very interesting things, for one thing, we often assume that the process of writing something like this is cathartic, but Katie questions this assumption herself, wondering if rehashing these events over and over again really is the healthiest thing. But then Katie has made a wonderful sacrifice in this respect because her intentions with this book is to write the book she wished had been there when she was suffering. I think the decision to make this book more aimed at secondary school children and beyond, as a realistic manual on recovery, is a fantastic one. The pressure on women to loose weight far outweighs realistic depictions of eating disorders in the media. As for the artwork Katie's childlike and naive characters perfectly juxtapose the dark underbelly of the story and I love the fact that something that was purely accidental (a crease in the paper she was scanning for her background) has become a crucial element in the structuring of her work. Katie you see doesn't like to use panels or speech bubbles(*2), so this crease became a way of separating the images although her splash pages and double page spreads are defiantly a thing to behold. Her representation of her eating disorder as a dark forboding shadow with whom she can have conversations is also a brilliant idea. I for one am highly looking forward to when Lighter Than My Shadow comes out. 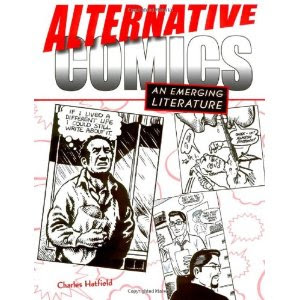 After Katie's talk was American professor of English and published academic Charles Hatfield (he wrote Alternative Comics: An Emerging Literature). A highly articulate and energetic guy Hatfield talked to us about his job teaching comics based courses at Calafornia State University and for one thing it was refreshing to have an academic openly demystify the process of academia. Hatlfield who was in the UK partly as a research trip (lucky man!) broke down his ideas into several areas which I'll try to remember off the top of my head (I was still in a post-nervous haze and foolishly didn't take down any notes). First and foremost Hatfield confessed to being a formalist at heart, encouraging his experiences to take from the formalists toolbox of terms. Hatfield talked about the influence of Thierry Groensteen's semiotic study The System Of Comics (which is one of the academic books on comics I've struggled with the most).
He then went on to talk about cartooning, and interdisciplinary. Interdisciplinary being the area that most interests me. Comics more than any other medium seems to be able to borrow from a whole range of other mediums, and cross other into respected disciplines, such as medicine, history, sociology, anthropology etc. It was also interesting to hear him discuss certain limitations in alternative comics, mainly that culturally it is something that it is created in the majority by middle class white males (although I think this is changing quite rapidly) and creators of colour are still something of a rarity. I look forward to hearing Hatfield talk again at the Manchester conference and picking his brains afterwords.

To finish the night we had Lebanese comic artist Joumana Medlej who is the creator of Lebanons first superhero. Inspired by the her childhood in war torn Beirut and taking the city as her main setting Joumana's presentation was a testament to the fact that you can get used to anything if it is part of your everyday life (something I myself am very much aware of). For Joumana the reality of war was simple: bombs meant no school, and no bombs meant school. Surprisingly life during wartime could be boring and Joumana took to drawing as a means of escaping that boredom. Her superheroine Malaak (Angel of Peace) is by day your average teenage Lebanese girl but by night is an ass-kicking bringer of a justice with a bumbling male side kick who thinks he is stronger and more fearless than he actually is (a nice touch). Also a nice touch is the creation of a league of civilians who help Malaak along her way (which Joumana confessed, was an easy way to meet the demand of friends begging her to put them in the comic). Malaak, Angel Of Peace is a refreshing reinvention of the superhero genre which far outweighs some small press attempts I have seen her in the UK (which tend to follow the superhero soap opera line) by being firmly placed in a reality familiar to Jouamana.

So overall the night was fantastic, and if there are any budding comic book artists out there or simply if you have a passion for the medium, I highly recommend you get yourself down to a Laydeez event in the future.

The general euphoria of getting a good response however could not match the hilarity of me falling down the gap between the platform and my train home. Pure class! 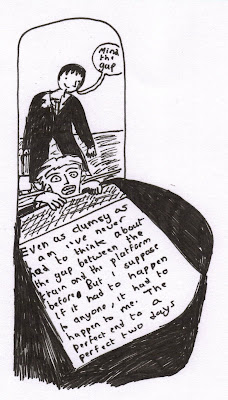 Expect a blog post from Mike Medaglia soon on the Laydeez Do Comics blog, and you can read Katie's two part summary of the evening here.