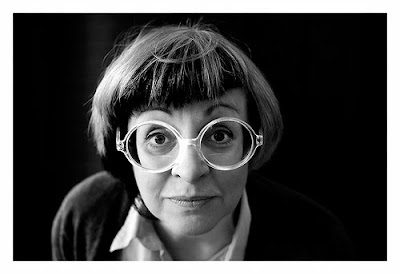 Philippa Perry is the wife of infamous Turner Prize winning transvestite Grayson Perry who once did a pretty good spot hosting Have I Got News For You. She is also a professional psychotherapist who growing up with dyslexia taught herself to read using comics such as Asterix, something which obviously cemented her love of comics right into her adult life where her discovery of Harvey Pekar showed her the true potential of the medium . She has recently written and published a graphic novel (illustrated by Junko Graat who Perry originally hired as her cleaner) concerning a fictional appointment between a psychotherapist and her new client, an upper class barrister with kleptomania . This along with Darryl Cunningham's effort 'Psychiatric Tales' is a book that helps dispel the myths surrounding mental illness, and in this case the process of psychotherapy. Written with humour, compassion, and insight, with captions underneath each page explaining terminology and techniques of the psychotherapy session. I spoke to Philippa through the wizardry of the Internet just after she had returned from the first interdisciplinary conference of Graphic Medicine in London (click here for more details). 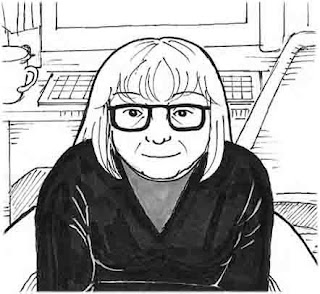 1. You've just taken part in a discussion at the first conference of graphic medicine in London. How did you find it?

Being a writer is a lonely business so it is good to connect to others who care about your work, study the genre and/or do similar work themselves. The conference raised questions for me that are good to mull over. E.g. Darryl asked Sarah Lightman whether a graphic based art piece about self-harm glamorises self-harm and could this be potentially dangerous? Good to put faces to names. Good to learn about others’ writing process e.g. Brian Fies(*1). But for me the most rewarding aspect was learning about the wealth of stuff that is out there and what it is, learning about the history of doctors themes in Manga and of French medic graphic artists. This learning curve was well kicked off with Paul Gravett’s opening key-note. Also good to know how the graphic genre is becoming available in hospitals and psychiatric wards where there are health workers that understand it.

2. What do you think of the growing discipline of medical humanities which was the basis for this conference?

Mind blowing really. Medicine is about people and if it is only about science, it will be missing the point. Bring in the narrative people are their stories.

3. Your book reads like a 'how to' guide for understanding the process of therapy. Do you think a certain amount of ignorance on the clients behalf helps secure the therapists power over the client and speed up the recovery, or does a greater understanding of the process help the client feel like they are in control and coming up with solutions themselves?

There isn’t a recipe on this one. Although I must say, I’ve never found any sort of ignorance helpful and I wouldn’t want to nurture ignorance about the therapeutic process. I hope my book does a show not tell thing on the dynamics of the power relationship. Sometimes there does need to be a positive transference onto the therapist in order for the therapy to progress but it is important if the therapy is successful that the therapist doesn’t cling to that power. I like it in the last bit of my book that James takes control of the session, asks for what he wants and gets it. This is very different from the beginning where Pat is laying down the law.

4. The most obvious contrast between your book and Daryl Cunningham's book is perhaps that your book is more overtly humorous. It does this by showing the character of the therapist to have her own weaknesses (being over eager, absent minded, even slightly sexually curious about her own client), do you think that seeing your therapist as a normal human being helps in the process?

People often expect their therapist to be some sort of perfect human being. One client once remarked that she was surprised I was drinking a red bull, she had assumed I could self regulate without resorting to caffeine! No, therapists have weaknesses like everyone else does, which seems obvious but with all that positive transference flying about (see above) it is important to stress therapists’ normality.

5. Playing devil’s advocate here what do you have to say to those who would argue that mental illness is culturally constructed, that symptoms for certain illness are extremely arbitrary, and that mental illnesses such as ADHD are simply trying to treat normal childlike behavior?

I’m very fond of RD Laing and I think he made a good point about the patient is often the recipient of all the projected madness in the family. (For more on projected identification see Wikipedia, or my book). A human being is socially constructed. We develop in relationship with another and therefore, yes mental health or mental illness is, in the main part, socially constructed and therefore culturally constructed. However there are exceptions, e.g. a brain tumour can cause a patient to behave oddly.

6. How much do you feel that the increased visibility of medical based comics and graphic novels will help to humanise illness and teach tolerance and understanding and do you think this would be better achieved by going through non-comics channels such as the national health service and various medical charities? Do you feel the educational potential for comics needs to be further explored?

The great thing about a comic is you see it as well as read it. It is also usually a narrative even if it is only using examples and diagrams of cells, its graphic nature makes it far more accessible than just a printed word. I believe that you also feel a comic as you consume it. I hope for example, people reading my comic will get a message that people are not born annoying, they are trained to be that way by their upbringing. If people find Darryl’s strips useful and how could they not, there will be an increasing market for the graphic strip. However I think that Darryl writes from the heart and I know I do too and if a comic sets out just to be educational and not heartfelt the reader will not be as stirred and they won’t be as useful. So yes, lets have more, but keep the human aspect, keep the heart in, don’t just to diagrams. I did work out a formulas for this

7. Darryl Cunningham mentioned in one interview that someone ordered two copies of this book in order to make their parents realise what they were suffering from is a real illness. At the risk of sounded cliched is the gratitude you receive both from the book and from your book, worth more to you then the reviews themselves? What kind of barriers do you consider yourself to be trying to break down with your book?

Gratitude, nice reviews – its good to hear, all of it because writing a book, a lonely long process is trying to communicate and when you get something back, you know communication has taken place and that is gratifying. The barrier I was trying to break down were the walls around my office. I wanted to show what therapy was like. It is a very private process, you can’t watch it you can only be in it, so I was trying to show what it was like to be in it, from the therapists and from the patient’s point of view.

8. And having just come from the Graphic Medicine conference are there any lesser known artists/writers/medical professionals whose stories and ideas particularly interested you?

Lesser known than me? I’m at the bottom of the lesser known pile! But watch out for Thom Ferrier aka our Ian, he is gonna FLY!

Thanks to Philippa for some really in depth answers. Her book is out now, published by Palgrave Macmillian. It reminds me of those New Yorker psychotherapy gag books you can get from the Freud Museum (just in terms of size and shape) but much better! Go buy it now! 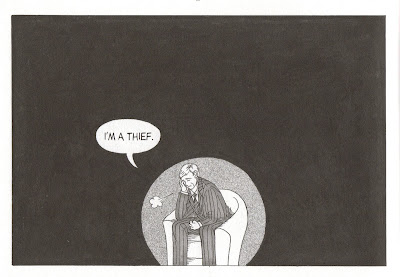 P.S My apologies to Darryl Cunningham, this was meant to be a three way interview, but understandably his work load has got on top of him. I highly recommend Cunningham's myth busting work (he has recently published comics on the MMR vaccine scare and the so-called moon hoax which are well worth checking out. His site is here.)